This week we were asked to invite 5 guests(living, imaginary, or deceased) that I would find interesting to a Dinner party. Just deciding who I would invite poses the hardest part of this week’s post! After mulling it over and weeding out some of the sillier guests, I think I have come to firm-ish decision on the VIP List.

In no particular order:

I’ve spoken about him before, and my stance is still the same. He had a lot of interesting things to say and would definitely get the conversation going. Here are some quotes that don’t seem pretentious at all to me. I hope they aren’t anyway.

“Without deviation from the norm, progress is not possible.”

“Information is not knowledge.
Knowledge is not wisdom.
Wisdom is not truth.
Truth is not beauty.
Beauty is not love.
Love is not music.
Music is THE BEST.”

“I never set out to be weird. It was always other people who called me weird.”

“Definition of rock journalism: People who can’t write, doing interviews with people who can’t think, in order to prepare articles for people who can’t read.”
“Interviewer: ‘So Frank, you have long hair. Does that make you a woman?’
Frank Zappa: ‘You have a wooden leg. Does that make you a table?”
“The illusion of freedom will continue as long as it’s profitable to continue the illusion. At the point where the illusion becomes too expensive to maintain, they will just take down the scenery, they will pull back the curtains, they will move the tables and chairs out of the way and you will see the brick wall at the back of the theater.”
“There’s a big difference between kneeling down and bending over.”
“I have an important message to deliver to all the cute people all over the world. If you’re out there and you’re cute, maybe you’re beautiful. I just want to tell you somethin’ — there’s more of us UGLY MOTHERFUCKERS than you are, hey-y, so watch out.”
“Some scientists claim that hydrogen, because it is so plentiful, is the basic building block of the universe. I dispute that. I say there is more stupidity than hydrogen, and that is the basic building block of the universe.”

Also, he would be easy to feed. “To me, a cigarette is food, I live my life smoking these things, and drinking the ‘black water’ in this cup here.” Most likely he would bring his own cigarettes so I would just need to supply him with some water that has been turned black. “Black water” is coffee by the way.

Who wouldn’t want Splinter at a dinner party? He is wise and also able to whoop ass should the need arise. Hopefully it would be a peaceful table, but you never can tell. We could discuss how he feels about his recent incarnations, and whether or not it was hard to keep track of all the turtles when they were in black and white (because I know it was for me). 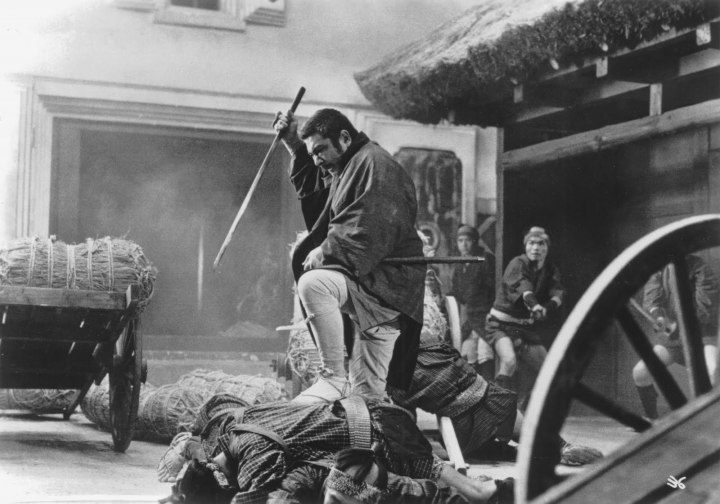 More badassery at my dinner table. A blind samurai, with other-worldly hearing, reflexes, and a real knack for massages. Bonus: splinter can translate everything so he won’t be bored and start trying to put out candles with the blade edge of his sword or practice cleaving in-flight moths in twain. These are things he does. And as long as we don’t try to get a dice game going (he is a known cheater(but only when they try to trick him due to his blindness)).

Quite possibly the funnest character on Modern Family, and my personal favorite. He could help with the cooking and of course the conversation. Another aspect of Cam’s that I love, is his instantaneous snap to angry or sadness. He is flamboyant and expressive and not grating(at least to me). He would be a great addition.

If you don’t know this man, you most likely know of his creation. Quite possibly the best comic strip of all time, more-so than Peanuts, Shoe, and Far Side(not knocking them of course). Calvin and Hobbes. I still have the trade paperbacks I got from the Scholastic book fair at school. Weirdos From Another Planet and Yukon Ho! Simply the chance to talk with him would make the entire dinner worth it no matter whatever what else happens. Sadly, Calvin and Hobbes is gone forever, but who am I to question a genius.

Here are some more posts from the league please enjoy them:

Kalem Klub better be buckled down for some arguments!

Go Play Listen has the music and conversation down pat!

If I wasn’t as excited about my dinner party, I would totally crash Cool and Collected’s Party!

I hope Super Powered Fiction has a translator for his party!

Primortial Badger’s Media Hoard didn’t invite me to his……never mind I just checked my schedule and can’t make it!

The traveling picture show barely made it out alive!

Cold Slither Podcast has quite the collection and I am sure it will be very entertaining!

The Nerd Nook will have a hilarious dinner for sure!

2 thoughts on “This Week on The League: Dinner Party!!!”

What is your quest?